If you drive a car, you (and your wallet) will be aware that petrol prices have dramatically increased recently.  We are told it is because of the war in Ukraine and that it is likely that petrol prices will be high for a while.  The federal government has tried to ease the pressure on consumers by decreasing the fuel excise for a period of time, but will the fuel companies pass all of this on to consumers? Fuel companies have all been increasing their prices on the same day every fortnight, which may have you wondering about the legalities of the price increases. Does this constitute price fixing?

Cartel conduct can include price fixing, sharing markets, rigging bids and limiting the amount of goods and services available to buyers. Price fixing occurs when competitors agree on a pricing structure, instead of competing against each other, which can lead to increased prices.

Cartel conduct of any sort is illegal and the ACCC has said that anyone who engages in cartel conduct is “breaking laws and stealing from consumers and businesses by inflating prices, reducing choices and damaging the economy”.

Being found guilty of cartel conduct can attract both civil and criminal penalties.

It is hard to see how a system that sees all fuel station prices go up on the same day every fortnight despite the multiple fuel companies is not cartel conduct. 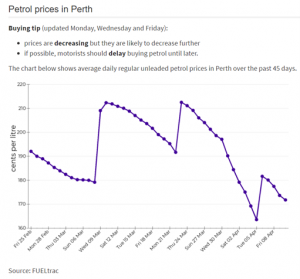 Petrol prices – Role of the ACCC

Due to the regular cycles of petrol prices, it is understandable if you are suspicious that fuel companies are engaging in price fixing.

The ACCC keeps a close eye on petrol prices to ensure no price fixing or other cartel conduct is occurring. To increase transparency around fuel prices, the ACCC reports on fuel prices, costs and profits every quarter. The ACCC also has the power to compel refiners, importers, terminal operators, wholesalers and retailers to provide the ACCC with information relating to their fuel prices.

On 29 March 2022, in the federal budget announcement, it was announced that there will be a six-month reduction in fuel excise. The ACCC chairperson Gina Cass-Gottlieb says the ACCC expects fuel retailers to pass on the cut in fuel excise to consumers by reducing petrol prices, and that the ACCC will be contacting fuel retailers to set “clear expectations that the savings are passed onto consumers”.

Another body that helps to monitor petrol prices is Fuel Watch. Fuel Watch is given its power by the Petroleum Products Pricing Act 1983. (“Petroleum Act”).

Prior to 2pm on any day, fuel retailers have to notify Fuel Watch of their petrol prices for the next day. In addition, retailers cannot change their prices, as notified to Fuel Watch, for 24 hours from 6am on any day.

A further measure to keep petrol prices in check is that suppliers who sell petrol to retailers and distributors from a terminal have to set their prices in accordance with a formula, called the Terminal Gate Price (or TPG). The TPG is set up to ensure petrol prices remain competitive.

If a fuel retailer or wholesaler breaches their obligations under the Petroleum Act, they face fines of up to $20,000 per offence for individuals and $100,000 for corporations.

Both the ACCC and Fuel Watch have been weak in prosecuting the fuel companies for offences.  As public sentiment grows against rising fuel prices and with no clear end in sight to current high rates the pressure will be on both Fuel Watch and the ACCC to ensure the fuel companies pass on the fuel excise reduction and comply with their legal obligations.

About the authors: This article has been co-authored by Chelsea McNeill and Steven Brown. Chelsea is a lawyer that graduated from Murdoch University. Steven is a Perth lawyer and director, and has over 20 years’ experience in legal practice and practices in commercial law, dispute resolution and estate planning.

Podcast: Territory FM radio interview with Steven Brown
The anti-bogan furore: Can an employer lawfully discriminate against the rough and unkempt?
3 Ways to Guide your Business into the New Year
Commercial Law: How COVID-19 can impact on contractual performance