Same Sex Marriage – “Why Shouldn’t They Be As Miserable As The Rest Of Us?” 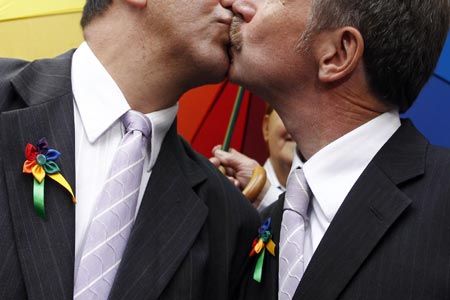 Same Sex Marriage – “Why Shouldn’t They Be As Miserable As The Rest Of Us?”

As Jack McCoy said in the TV show Law & Order “Let them marry. Why shouldn’t they be allowed to be as miserable as the rest of us?”

So why shouldn’t a gay person be allowed to marry the person whom they love?  The heterosexual community often take for granted the freedom to marry, which is seen as the ultimate commitment of love to another person.  With Ireland recently voting to recognise and allow gay marriage within its country the question should be asked, why is Australia trailing behind the rest of the world?  Keeping in mind that Ireland has a high population of the Catholic community and was the first country to put the questions to the people in a referendum.  Should Australia legislate to allow gay marriage?  In order to shed some light on the question we will examine gay marriage around the world and the arguments for and against it.  It is interesting to note that Bill Shorten is introducing a private member’s bill to bring about change in Australia.

Gay marriage has been recognised around the world in three ways.  Firstly an act of parliament can legislate to allow gay marriage; a court can make a ruling stating that gay marriage is constitutional; or a referendum can be held changing the constitution of a country (if one exists) to include gay marriage.

The countries that have recognised gay marriage as a legal form of marriage are:

In order for gay marriage to be legal in Australia all that is required is for the federal parliament to pass legislation to amend the Marriage Act 1961 (Cth).  No referendum is needed to pass the law for one simple reason, the constitution as it stands, does not prevent the making of laws for gay marriage.

THE ARGUMENTS AGAINST – WHY GAY MARRIAGE SHOULDN’T BE ALLOWED

Marriage is one of the longest standing traditions and has always been between a man and a woman.  For the recognition of two men or two women to marry would be considered by some people, unnatural.  It may be considered to be unnatural because a man and women were created to procreate and therefore, the argument goes, anything as unnatural as two people who are the same gender marrying should not be allowed.

The argument against gay marriage states that the sanctity of marriage is one that should be protected, not just for tradition’s sake but for what it stands for and it’s religious origin.  Why do the gay community need to have their relationships validated through a religious ceremony, it would essentially reinforce that those people would be living in sin which cannot be approved in the eyes of God.

Detractors of gay marriage say that homosexual people have the other options aside from marriage including a civil union or partnership, or to be included under the definition of a de-facto with many people believing that marriage should be strictly between a man and a woman.  There should be no reason why a civil union should not be sufficient for people living in a gay relationship.

When talking about equal rights it should be said that gay people have exactly the same rights as any other person, that is to marry a person of the opposite gender but they chose not to do so and that is also their right.  They still possess the right to marry and no one can take that away from them however under the definition of marriage, not by law but by custom, marriage is to be between a man and a woman.

If gay marriage was allowed then what would be next, would there be arguments for people to marry more than one person?  The argument against gay marriage is that if the sanctity of marriage is not preserved it would be open to more change and dilution in the future.

THE ARGUMENTS FOR – WHY GAY MARRIAGE SHOULD BE ALLOWED

In today’s day and age the meaning of marriage is not that of what it used to be.  Marriage is not something that is regarded as for life and parties can get divorce for no fault from either person.  Why should the marital institution be preserved when it has been abused and lost its historical meaning?

The Australian Bureau of Statistics released a study which found that 1 in 3 marriages ended in divorce.  This shows that many people do not believe the institution of marriage is for life, which is an important factor when you consider the historical origins of marriage.  This is amplified when you consider some marriages which don’t even make it through their first year.  It is hard to argue for the preservation of the institution when people such as Kim Kardashian can be married for 72 days and Brittney Spears was married for not even a week!

It is interesting when you consider the argument that marriage is a religious institution, should those heterosexual couples that are not religious be excluded in the eyes of those institutions from marriage because they don’t possess the religious intention?

Many believe that marriage has evolved to such a state that it no longer has a religious meaning.  Some people might attach religious meaning to it whilst others view it as the ultimate commitment to another person.  The gender of a person whom someone loves is as irrelevant as the married for life concept and the legislation needs to reflect that.

Gay rights have developed from what they use to be, we have never lived in a society that accepts homosexual people as much as we do now and in 50 years’ time we may well look back at this issue and wonder how we ever could have lived in a time that would discriminate against a group of people and prevent them from expressing their love and commitment in the same manner as a heterosexual couple is able to.

Proponents of gay marriage believe that it is not enough that a gay couple can have a civil union, they should be entitled to marry and express their love to one another and make the most meaningful commitment a person can make to another because when someone gets married they intend to commit that person for life and that is what marriage has evolved to, love and not religion.  Love does not discriminate.

Take a few minutes to watch this video of Reverend Phil Snider discussing gay rights and consider how history will look back on this movement for equal rights because similar movements have been made in the past and now they seem second nature to us all.  Make sure you watch all the way to the end (it’s not long)!